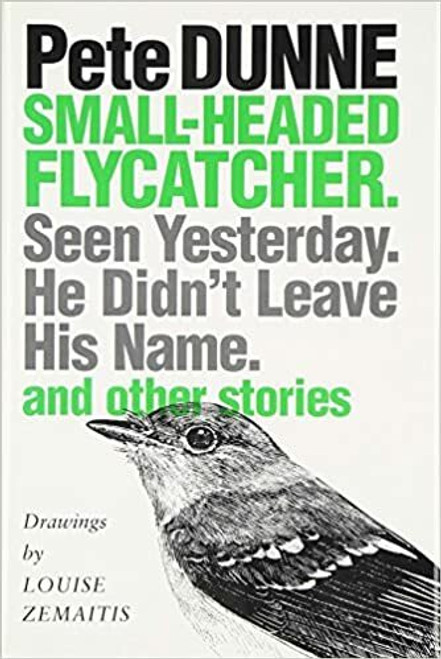 Small-Headed Flycatcher: Seen Yesterday- He Didn't Leave His Name- and Other Stories, Paperback

Pete Dunne has been watching birds since he was seven years old. But not just watching -deeply absorbing every nuance of color, markings, shape, flight, and song; all the subtle clues that can identify a bird barely glimpsed among the highest branches in fading twilight. With the same skill, he has been observing and writing about birding and birders for over twenty years, using humor, sentiment, occasional sarcasm, and unashamed passion for his chosen profession to explore why birdwatching is so irresistibly compelling to so many people.

This book brings together thirty-two vintage essays that Dunne originally wrote for publications such as American Birds, Bird Watcher's Digest, Birder's World, Birding, Living Bird, the New Jersey edition of the Sunday New York Times, WildBird, and Wild Bird News. Encounters with birds rare and common is their shared theme, through which Dunne weaves stories of his family and friends, reflections on the cycles of nature, and portraits of unforgettable birders whose paths have crossed his, ranging from Roger Tory Peterson to a life-battered friend who finds solace in birding. A cliff-hanger story of the bird that got away gives this book its title.

Already a member?  Receive 10% off all eligible products by using Coupon Code MEMBER2023 at checkout.